I’ve always loved Guitar Pro 5 as a quite good tool to learn and practice tabs, there are new versions, but I stick to that one. Sadly it only runs on Windows and I don’t have one anymore therefore I decided to run it using PlayOnLinux. After installing Guitar Pro 5 quite easily, I came across one main problem, I had no midi sound. The problem is not only related to Guitar pro, but is related to the need of midi with PlayOnLinux or Wine.

As the man says, timidity is a “MIDI-to-WAVE converter and player”,  it simply means for us that it will do the trick between our OS and the software inside PlayOnLinux. Up in !

Now that we have timidity we just need to make a wrapper to start Guitar Pro 5, or any other software. You can use this script and adapt it to your needs:

Quite simple, we just start timidity then our software, here GP5 is the name of my virtual drive in PlayOnLinux, and we kill timidity. Yeah the kill is bad but SIGQUIT wouldn’t work, I got tired.

Don’t forget to chmod it to be executable.

Finally we can make a shortcut on our desktop (~/GP5.desktop):

As you may notice, line 6 is the call to our wrapper.

For those who don’t know and are interested about Guitar Pro 5’s audio configuration, once you are done with the setup I’ve shown, you still need to configure the correct MIDI output. In Guitar Pro 5, go to Options > Audio Settings (MIDI/RSE). Select TiMidity port 0 as the first port output device. 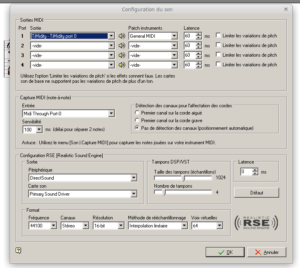 I didn’t use it enough yet, but I got some cracking sound sometimes, for now I save what i’m doing in Guitar Pro and restart it. I guess the problem could be solved by giving extra parameters to timidity. If I find anything I’ll let you know.

I was given a new xbox360 wireless controller at xmas, and I wanted to run my both controllers with one receiver in Dolphin emulator, for whatever reason the normal way didn’t work. Never was the second controller seen in Dolphin !

I went through testing and reading tons of stuff and I ended UP using xboxdrv.

As mentionned in the man, xboxdrv – A Xbox/Xbox360 gamepad driver that works in userspace !

Alright evtest is not that important, but to debug it can be useful.

Now we’ll blacklist xpad to be sure it won’t bother our configuration.

Now you have to reboot before to go on, it’s important.

Back online, plug in your USB wireless receiver. Check it’s there:

Do the procedure to register your controllers (one after another):

Now we’ll check that xboxdrv is working by listing our receiver(s)/controller(s):

As you might have noticed, I have one xbox receiver that can manage up to four controllers (they all do that), explanations:

As stated in the commentaries, make sure to configure sudo for your user (here mine’s floreo) and the command xboxdrv, indeed it needs to be root to work.

In my case, everytime my session starts, the script does too. Depending on your OS I don’t know where you can put it. You can also do an init script but it’s more of a bother.

UPDATE: Following this post, I’ve added the –mimic-xpad flag in my script so my right stick would eventually work ! It allows you to control the camera in games for example in Steam which is quite better now.

Now open up Dolphin and click on Controllers, in device you should now see evdev/0/Xbox Gamepad (userspace driver) and there should be four of them, the last three ones with a #X. (X being an integer) 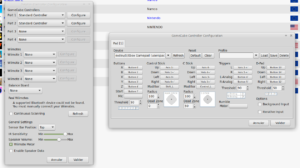 Select the first one, press refresh and wait a second. It should now be recognized, press buttons on your controller and the interface should blink in red for every input (try A/B/X/Y first).

If it’s not working, go to troubleshooting else you just can start playing !

If nothing works, check again that everything is plugged and that your controllers are registered, do it one more time to be sure.

Kill the script as root and open up two terminals, in one you’ll launch that command:

In the other do that:

Some result should popup if none then it’s too bad, it certainly mean you didn’t blacklist well xpad, that your kernel’s too old, or something else.

You might try to check with evtest as root:

It should show you a list of what’s connected to your computer, with any luck you could see Xbox Gamepad, if not you’ll have to try to test them.

You should have a list of several inputs, you can try them one after the other like that:

Try the inputs one by one

Press buttons on your controller, if it displays anything then it works.

Well voilà, that’s all I can say for help, good luck, it’s quite long to debug that.

Let’s talk about Haproxy which is quite a good reverse proxy, I assume if you are here you know what it is ^^

Let’s walk trough installing it on Raspbian (would work on any *nux), if you are on Debian/Ubunt you can use a cool link that will give you the sources.list.

I wanted to install haproxy using the package manager on my system, but it’s always old versions:

If the version shown in your package manager if what you want, just install it and you go to the configuration.

I needed the version 1.6, so let’s compile ! If you need an other version, keep reading it’s not that hard.

Now a few dependencies that you might need too:

Finally let’s do it:

As you might notice I require PCRE, LIBCRYPT and most important for me OPENSSL.

If you have a few errors try to google them, don’t forget to do what’s below before you try to compile again:

Now we got the binary that we can move:

Last but not least, you need an init script, there you go (I kindly copied it from a package installed version, all the credit goes to the author)

If needed, make some changes ! In my case, everything ran smoothly.

The installation is done, next step is the configuration.